125
Today at 19:08
ZOOM Heroes and Zeros, with Andy Rice
The Money Show with Bruce Whitfield
Guests
Andy Rice - Branding and Advertising Expert at ...

125
No Items to show
OnAir
filetime
status
Up Next: Early Breakfast with Africa Melane
See full line-up
Best of 702
00:00 - 04:00
Home
Features
News
Shows
Podcasts
Competitions
Local
Politics
Business
Lifestyle
Sport
Entertainment
World
Africa
Opinion
Latest Local
DA responds to ConCourt judgment on IEC regarding candidate registration rules Democratic Alliance representative on the IEC's national party liaison committee Werner Horn says certain conclusions may be benef... 20 September 2021 5:00 PM
Emotional Nomia Ndlovu denies having problems with boyfriend before his murder Ndlovu was giving her account of the day she learnt of Mabasa's death. She also denied that they had been experiencing problems in... 20 September 2021 2:55 PM
'Municipalities and metros must be prevented from profiting from tariffs' Good Party leader Patricia de Lille says people who are dissatisfied with municipal and metropolitan councillors should vote them... 20 September 2021 11:37 AM
View all Local
ConCourt ruling on IEC candidate list opening not surprising - Terry Tselane The IEMSA executive chairman and EWN reporter Tshidi Madia reflect on the judgment against the DA. 20 September 2021 1:07 PM
SA to engage with UK embassy to understand measures needed to get off red list Acting director-general Of Health Dr Nicholas Crisp says he is disappointed that the country is still on the list. 20 September 2021 8:11 AM
Late Joburg mayor Jolidee Matongo hailed as man of action Spokesperson Mlimandlela Ndamase says the late mayor who died in a car accident cared about delivering services to residents. 20 September 2021 7:43 AM
View all Politics
Exxaro looks beyond coal, to expand into minerals Arabile Gumede interviews Riaan Koppeschaar, Finance Director at Exxaro. 20 September 2021 7:07 PM
Dept urges SMMEs to apply for relief packages following July unrest According to Small Enterprise Finance Agency (SEFA) Executive Finance Manager Tumi Sefolo, the department had divided the support... 20 September 2021 1:37 PM
Why investing abroad is your next money move How do SA investors begin to venture into the global market? Here are the risks and rewards around international investments. 20 September 2021 6:01 AM
View all Business
'I've had a lot of failures, but time moves', says photographer Simphiwe Mhlambi Losing his first marriage, money issues and securities are some of the challenges Simphiwe Mhlambi has had to overcome. 17 September 2021 3:49 PM
'Mmago ngwana o tshwara thipa ...' and other patriarchal proverbs that must go Clement Manyathela took some calls to hear what 702 listeners think should be some of the patriarchal proverbs to be done away wit... 17 September 2021 11:57 AM
Ad agency melts down 27 years of awards in gesture to honour all its employees Net#work BBDO is creating tribute pendants in recognition of staff's contribution to its success, Andy Rice tells The Money Show.... 16 September 2021 7:49 PM
View all Lifestyle
'When I set goals, I really put in the work': Paralympic champ Ntando Mahlangu Gold Paralympic medallist Ntando Mahlangu says it's been heartwarming to see how South Africans have responded to his wins, as a l... 16 September 2021 3:08 PM
PARALYMPICS: It's a very high-performance sport, encourage youth to participate Former Paralympian Leon Fleiser told John Perlman that South Africa didn't have enough participants for the Tokyo Olympics because... 10 September 2021 5:40 PM
SA rising tennis star Lloyd Harris makes it to the US Open quarterfinal John Perlman speaks to head coach Anthony Harris about what it was like meeting Harris when he was 14 years old. 8 September 2021 5:20 PM
View all Sport
[WATCH] Woman breaking down meaning of nursery rhymes has us talking Khabazela shares some of the videos that went viral on Twitter and Facebook. 20 September 2021 8:56 AM
Kids saying the most embarrassing things about parents thread goes viral Khabazela shares some of the videos that went viral on Twitter and Facebook. 20 September 2021 8:45 AM
There is a lot of uncertainty but we must be optimistic - Springbok Nude Girls Band member Arno Carstens says Partypocalypse reflects what is happening now in the world. 17 September 2021 3:01 PM
View all Entertainment
Why investing abroad is your next money move How do SA investors begin to venture into the global market? Here are the risks and rewards around international investments. 20 September 2021 6:01 AM
'Oryx' salt from the Kalahari Desert set to hit Whole Foods shelves in the US Bruce Whitfield talks to founder Samantha Skyring about Oryx Desert Salt's listing by the US multinational supermarket chain. 16 September 2021 6:21 PM
I have more than enough money for myself - Lindiwe Mazibuko Bruce Whitfield interviews Lindiwe Mazibuko about her attitude to money (hopes and fears, successes and failures, etc.). 14 September 2021 2:21 PM
View all World
'Govt can't just leave this, lives were lost while they tried to make profit' Bruce Whitfield talks to tobacco control expert Prof. Lekan Ayo-Yusuf about a BBC investigation into British American Tobacco. 15 September 2021 8:10 PM
Your money wants to bank on South Africa, do you? Is South Africa still a winning investment despite the headlines and hardships? 13 September 2021 5:43 PM
Here's how telecommunications companies are helping farmers yield results Telecommunications companies are at the forefront of agriculture technology... So, why are South African farmers not embracing it? 13 September 2021 6:00 AM
View all Africa
[BOOK REVIEW] Why sex toy sales, porn traffic go up when the economy goes down Arabile Gumede asks Bronwyn Williams (Flux Trends) to review “Dirty Money: The Economics of Sex and Love” by Marina Adshade. 20 September 2021 7:45 PM
South Africa remains on the UK 'red list' of banned countries Arabile Gumede interviewed Busisiwe Mavuso (Business Leadership SA) and David Frost (South African Tourism Services Association). 20 September 2021 6:52 PM
BONGANI BINGWA: A voice in the desert #702Breakfast presenter Bongani Bingwa shares his thoughts on Carl Niehaus. 18 September 2021 9:00 AM
View all Opinion

Soundtracks of My Life

The days news stories delivered by the one of South Africa most respected news presenters.

Weekdays from 3pm to 6pm.

John has worked in television, as a football commentator, and was the presenter of the current affairs programme The Round Table on SABC1. John was also the host of Under the Skin on eNCA.

John has been a newspaper journalist with the Weekly Mail, the Saturday Star and the Sunday Independent and has written for a number of international publications including The Guardian and the Financial Times.

Check out highlights from John's recent shows below, and be sure to subscribe to not miss out!

If you have a story to share with John Perlman, click here to let us know about it. 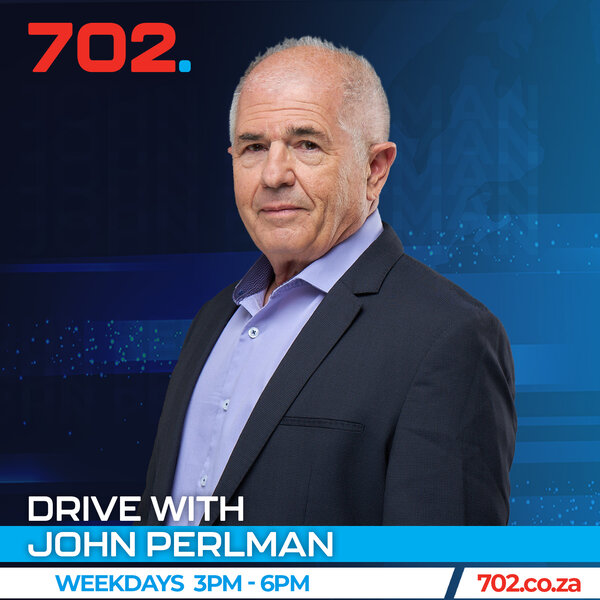 The days news stories delivered by the one of South Africa most respected news presenters from 3 pm to 6 pm weekdays.

Victim Mulalo says they also took R400, a spare wheel and everything in the car boot. Police have arrested one suspect.

PARALYMPICS: It's a very high-performance sport, encourage youth to participate

Former Paralympian Leon Fleiser told John Perlman that South Africa didn't have enough participants for the Tokyo Olympics because few qualified according to the rules of the game.

Digital vaccine certificates to be standardised according to WHO specifications

African Reclaimers Organisation executive committee member Luyanda Hlatshwayo says they have to start changing perceptions about what we are doing.

John Perlman speaks to GCRO senior researcher Dr Alexander Parker about how the report was conducted.